Penalties and Fouls in Polo 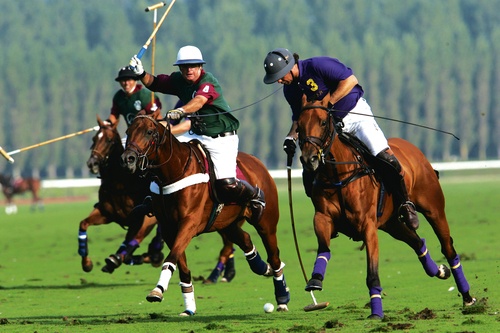 Most of the rules in polo are for the safety of the players and their horses.

The main objective of the referee is to control that the rules are enforced and, in theevent that this does not happen, apply fouls and penalties.
Probably the non-fulfillment of the right of way and the line of the ball, it is the most serious penalty. The ball line is an imaginary line that is formed each time you hit the ball. The line marks the path of the ball and its extension. The last player to touch the ball has the right of way. This must be respected throughout the game, as it can cause a collision of the horses.
Another foul occurs when a player uses the stick to block or interfere with the opponent’s movement and is located on the other side of the move, this it’s not allowed. The same occurs if the player has physical contact with the opponent so that he moves away from the ball, and is not at an angle of 30 degrees or is above the shoulders of the horse.
Finally, hitting between the legs of a horse is prohibited. Crossing the right of way to another horse is one of the most serious and dangerous fouls. The penalties are determined according to the degree and place of the offense. As we mentioned previously, what is most sought is not to hurt the horse, as well as taking care of the players. It is the referee who analyzes each situation in particular and applies its corresponding sanction.